While our interior lighting choices tend to be fairly utilitarian, we upped the ante for our exterior lights (with some help from my folks!) Recently, my mom called me from the showroom floor of the Old California Lantern Company in the middle of a huge sale. The prices were unbelievably good and she thought we could use a light for the back porch. I asked her to look for something with a low profile (to avoid hitting our heads) in copper (to match our rain chain). 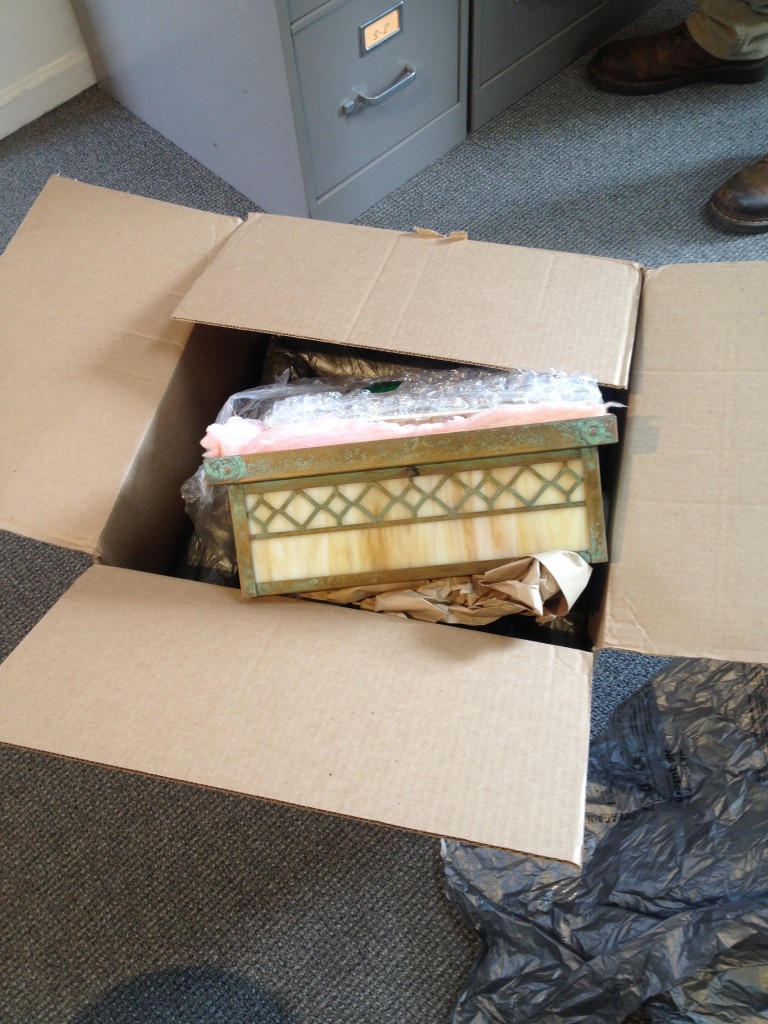 When the light arrived, it was much bigger than we expected—and we saw it as a way to light the patio itself, rather than just the back door. Although the glass was not exactly the same as our light in the front, it was very similar and looked great against the color of the house.

Of course, we couldn’t install such a nice looking light on our awful patio. The ceiling had been finished with some sort of laminated cardboard that probably began sagging the day after they put it up. The day we got the light, Jonathan took a crowbar to the patio to see what was under it. The ceiling had been glued on rather than nailed on, which accounted for the sagging. Aside from quite a bit of peeling paint (will we ever be rid of that horrible green?), it was in surprisingly good shape. The plan was to replace the laminate with beadboard, trim it out, and paint it to match the front porch. While it seemed simple it involved trading out some projects with a friend. I spent Sunday morning putting in exterior French doors at his house so I could use his van to haul the bead board. I devised an awkward system of scooting panels into place to deal with the door trim. The other complication was centering the light to the porch.  The electrical part was easy having pulled down all the old boards. The challenge was finding the box through the panel and fighting an uncooperative router above my head while holding the panel in place. In the end, the light was so huge it gave me a massive margin for error. Although I was a little worried about using the same blue, it set off the light nicely. In fact, I think the light matches the tones we used in the house so well, it would have gotten lost with any other color.